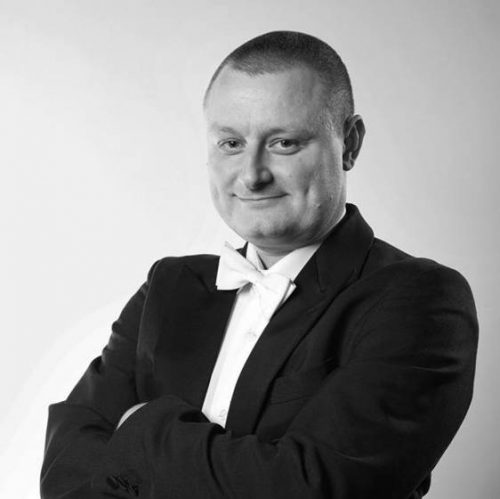 BACH TO BABIES with Tomas Hurnik

Interactive Barock Concert for 0-3 year olds and their caregivers.
This concert is for babies and children 0-3 years and their parents/caregivers. It features international cellist Tomas Hurnik who will play beautiful music from the baroque period. His concerts for babies and young children never fail to captivate his audience and we have had babies crawl right up to him and sit entranced with the wonderful music he plays.

He received his masters at the Academy of Music in Prague. While studying he was an active performer, playing and recording as a soloist with different orchestras and as a member of chamber groups for Czech radio and concerts both in Czech and abroad (Germany, Austria, Japan and France). In 1998 he was hired as the principal cellist for the Malaysian Philharmonic in Kuala Lumpur with which he played for four years. He then returned to Europe to study Baroque cello in Frankfurt with Rainer Zipperling. He continued to actively perform with a variety of period instrument chamber groups such as Musica Florea, Capella Regia Prague, Musica Aeterna and Solamente Naturali. He now plays as the Associate Principal Cellist for Christchurch Symphony Orchestra. In 2015 he founded Baroque Music Community and Educational Trust of New Zealand to organize and perform concerts, workshops and masterclasses of Baroque music on period instruments. 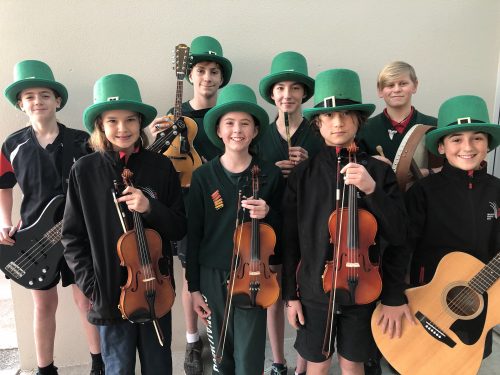 3pm Monday in the Cafe Area 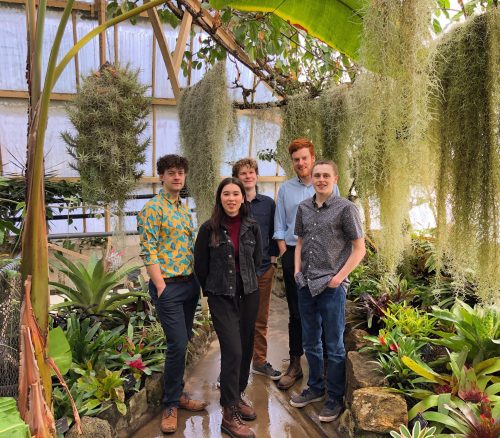 Ocelot is a Christchurch based jazz quintet formed of five current Ara Music Arts students. They specialise in modern jazz music playing a mixture of original compositions and modern transcriptions. Tonight you will be hearing four fifths of the quintet with Cheena Rae (sax) Finnzarby Richwood (keys) Callum McInnes (bass) and Finley Passmore (drums). They will be playing a curated mixture of modern and standard jazz tunes. 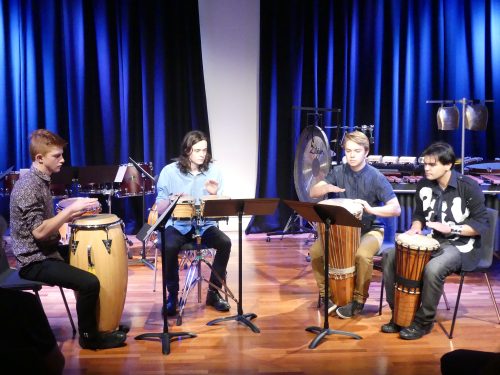 UC Percussion Ensemble
The UC Percussion Ensemble, led by Justin DeHart, presents an evening of exciting works for percussion. High energy drumming, Brazilian tambourines, North Indian Tabla, Swiss cowbells, and a variety of other traditional and non-traditional instruments will be featured. Members include graduate and undergraduate students at UC and percussionists from the UC-Christchurch Youth Orchestra. 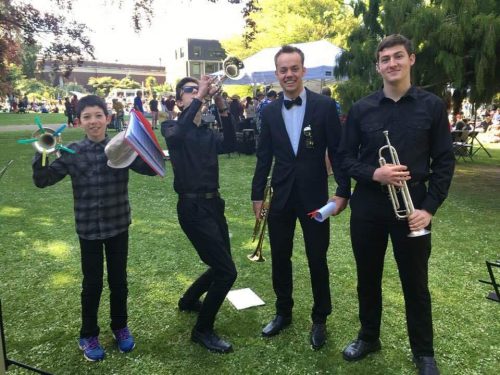 The Christchurch School of Music Big Band is directed by Georgina Rees-Stevenson. https://www.csm.org.nz/big-band/ This performance follows the workshop with Rodger Fox. 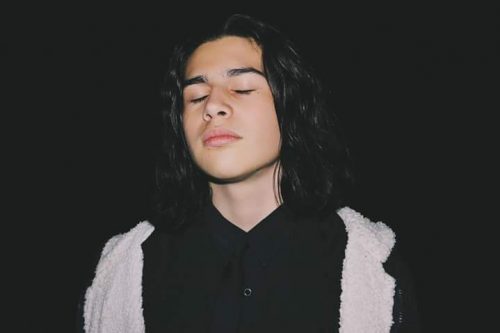 Liam is a beatboxer and a vocal percussionist, with a strong passion for electronic-style music. He was involved in the a-cappella academy Voices Co. and participated in the TV One show, ‘The Naked Choir’ in 2017, which they won. Liam has a passion for music production, working under the alias ‘Mocadium’ for all his electronic music. He is also apart of the Christchurch Taonga Puoro group, teaching and performing traditional Maori musical instruments. They performed most recently at the opening ceremony of ‘Te Matatini’ Kapa Haka competition. 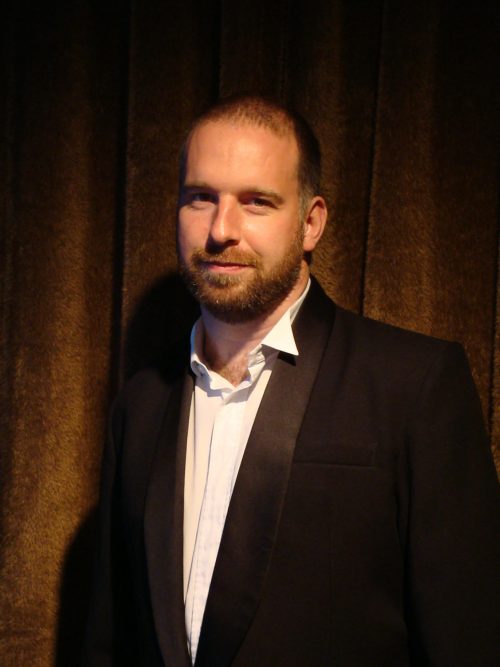 Mark Baynes is a jazz pianist with a contemporary leaning. Mark’s doctoral research has provided an analytical lexicon that can be used to understand music in terms of what is defined as consonance and dissonance found in western music as a whole. Although informed by academia, Mark is primarily a performer, composer and accompanist residing in Auckland, New Zealand. Mark is a presenter of 95bFM’s The Jazz Show, and writes for the X-Factory column for NZ Musician Magazine, and on occasion, MENZA’s Tune Me In magazine. Mark recently performed for the 2019 ITP Symposium demonstrating his docotal research (https://www.youtube.com/watch?v=C7QzdKEM2PY). Mark has enjoyed working with acts such as NZ hip hop artist King Kapisi, Che-Fu, Andy Vargas USA (Santana), Tim and Neil Finn, The Mint Chicks, Clay Jenkins (USA), Mark Kramer (USA), Tony Christie (UK), Anika Moa, Don McGlashan, Batucada Sound Machine, Bella Kalolo, APO and the Topp Twins. Mark worked for eighteen months in the Middle East as a musical director; a pianist/MD for ProShip (Canada) for two years; and has released two albums under the pseudonym of Ironic Trio (available on iTunes), and a producer and pianist of Henrique Morales’ debut studio album (2016), a collaboration between Brazilian and New Zealand musicians, sung by Morales and written by Fernando Corona. Mark has collaborated on several highly successful projects including contributing to King Kapisi’s latest album release, and co-writing Sunshine, a soon-to-be released single/video. One of the tracks on this album (Crush) won the best video category at the Pacific Music Awards 2014. In 2008 Mark was awarded the Ariadne Danilow Music Prize (Victoria University) and the Sir Alan Stewart Postgraduate Scholarship (Massey University) enabling him to pursue postgraduate study. Mark has studied under Gary Burton at the Berklee College of Music. Mark currently works as a Programme Manager and Senior Lecturer of the Bachelor of Musical Arts Degree at the Music and Audio Institute of New Zealand / Southern Institute of Technology. 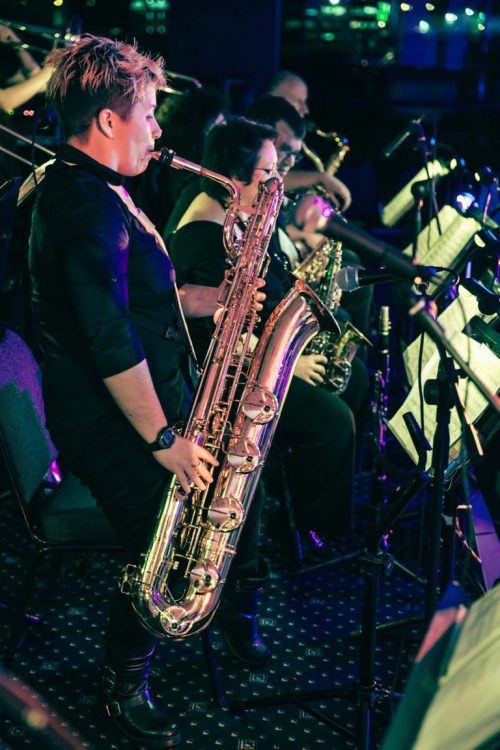 The Christchurch-based Garden City Big Band is a full 17-piece big band consisting of some of the best local musicians & vocalists in its line-up. The band is directed by local big band identity, Lana Law.  The band will bring a special programme feature composers, arrangers and performers from ōtautahi including Doug Caldwell, Stu Buchanan and Doug Kelly.  https://www.bigband.co.nz/ 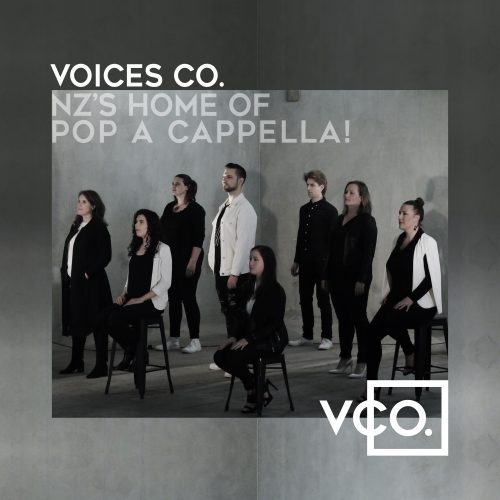 Based here in Christchurch, Voices Co. is NZ’s first and only vocal training Academy to specialise in Pop A Cappella! Since they first opened their doors (and mouths!) in 2016, Voices Co. has grown to upwards of 70 students, ranging in age from 3 – 73, and spread across 9 different ensembles / classes.

In 2017 their 5-piece Premier Ensemble participated in, and consequently won, TVNZ’s reality TV competition ‘The Naked Choir’, taking the title of NZ’s best a cappella group.

Inspired by music like Pentatonix, the Pitch Perfect movies, and a passion for harmony,  the aim of Voices Co. is simple: to see singers of all ages and stages equipped with the very best in vocal training, encouraged in their passion for music, and empowered to find their voice. 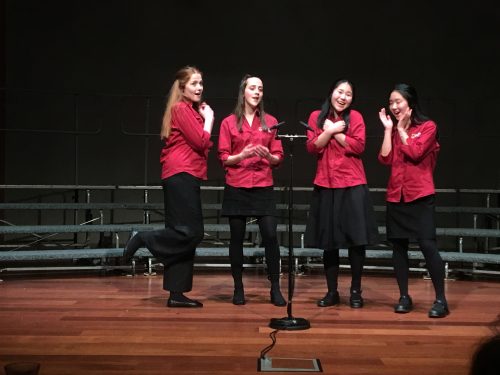 We are Truly Scrumptious, a barbershop quartet from Cashmere High School. Our group is composed of four talented musicians aged 15-18; Anna Gibbs, Yuki Saito, Yuyu Saito, and Nina Noble. The quartet was formed in 2019 for the Youth Singers In Harmony Competition, and we receive weekly tuition from our vocal coach and favourite teacher, Helen Charlton. We have been very privileged to receive workshops from Hazel Hay and Nicky McCaughan, the assistant-director and choreographer from the Christchurch City Chorus. Their time and knowledge helped us to placed 2nd in the regional competition and 9th in the national competition.

Although we spend a lot of time singing and coming up with bad dance moves, between us we also play flute, cello, viola, piano and trumpet. Outside of music we enjoy baking, basketball and badminton. Nina, our tenor, will sadly be leaving us for university next year, but we will make her proud and continue to sing together as a quartet. We love performing together and can’t wait to sing for you all! 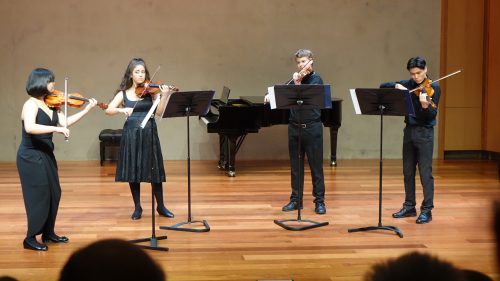 Victoria Lee is the concertmaster of the New Zealand Secondary Schools’ Symphony Orchestra (NZSSSO) for 2019 and led the viola section in the 2018 orchestra.  She gained her ATCL Diploma on the violin in 2016 when only in Year10.  Victoria already has many notable performing experiences and achievements to her credit. These include being the Associate Concertmaster of the Christchurch Youth Orchestra (2016-2018). A particular highlight was winning a place in the International Honors Performance Series String Orchestra which saw her perform at Carnegie Hall, New York in early 2018. Later the same year, Victoria received a rare special award at the Christchurch Schools’ Orchestra Festival for orchestral leadership.

Samuel Jeon is in year 11 and started violin from the age of five. He currently learns violin from Professor Mark Menzies as a special University of Canterbury scholar. Samuel passed dipABRSM piano in 2015 and dipABRSM violin in 2017. Samuel has previously been involved in the Chamber Contest as a pianist in 2017 and 2018, making it to the semi-finals on both occasions. Samuel enjoys art and creating films in his spare time as well as football and basketball.

Grace Lawrence was leader of the Christchurch Primary Schools Festival Orchestra in 2016 and 2017. She has been a member of the NZSSSO since 2018 and currently studies violin with Stephen Larsen.

As the fourth member of the group, Callum Hampton, is unable to be present today the composer of this piece, Isaac Shatford, is stepping to play his part.

The quartet was formed in 2018 for the Chamber Music Contest by Mark Hodgkinson and reached the Regional Finals.  With there being a shortage of repertoire for four violins, they were fortunate that their school was willing to commission a former student, Isaac Shatford, to write a piece especially for them.  Isaac has recently completed his Bachelor of Music with honours in both violin performance and composition at the University of Otago.

The new work is called Real Mature and although only a few performances old, it is already receiving many positive comments for its exciting technical demands and musical vitality.  It has provided a valuable challenge for the players as they have had to prepare a completely new work without the benefit of other performances to refer to.